I read a news story this morning about a new line of Barbie Dolls that are being released called the “Barbie Basic Collection.” Each of the Barbies in this line is wearing a little black dress. Apparently, one of the Barbies is creating a bit of controversy because she is showing too much cleavage and many people, moms in the story that I read, think it is inappropriate for Barbie to show so much cleavage. They contend that this particular doll was designed to mimic the look of having breast implants. If I may, I’d like to offer a bit of objective commentary on this issue: It’s a doll. The end.

I have a four year old daughter, Gracie, who has numerous Barbies that share her toybox (and floor) with dolls of varying sizes and shapes. Most of them are naked, their clothes usually stripped within minutes of removing them from the packaging. By the way, when did it become necessary for me to have to have a fully-stocked Snap-On tool box just to remove a toy from its packaging? Having to use a pair of wire cutters and a screwdriver just to open a Star Wars Millennium Falcon that Santa Claus brought can really suck the joy right out of a Christmas morning. Trust me on that. Geez Louise! Anyway, take a glance into my daughter’s room and you might think that one of the bad guy G.I. Joe action figures had set off some sort of explosive device which blew the clothes off of all the dolls. The toy pig remains clothed in full princess regalia while the princess lies naked among the carnage. Good thing, I suppose, since princesses tend to be a bit diva-ish and probably don’t take too kindly to their royal clothing being worn by a common farm animal. Go figure. Anyway, I don’t ask questions. It’s not a big deal in my mind if one Barbie had breast implants or another one had liposuction on her thighs along with some lip-fattening toxin injected into her face and it doesn’t appear to be a big deal to Gracie either. They’re toys and she is keenly aware of that. They ride upside down in strollers, have conversations with friends on toy phones, and make death-defying leaps from towel-racks high above the bathtub into mere inches of water. They’ve driven pink Corvettes off of kitchen counters and walked away unscathed. Naked, but unscathed.

With all the problems that exist in the world today…war, terrorism, crime, unemployment, stock market crashes, liberalism (had to throw that in for some of my “progressive” friends)…I have to say that a big-boobed-Barbie ain’t one of ’em! Some may say that this Barbie will cause Gracie to have unrealistic expectations about what women should look like. That if she grows up and doesn’t have the “perfect” body, whatever that is, that it will somehow be because my wife and I were bad parents and let her play with “Implant Barbie.” I don’t buy that. I grew up in a time when every boy had toy guns that looked real. We fought countless wars and had more shootouts than I could ever count. I always had a BB gun close by and even got lucky and shot a few mocking birds over the years. Those games and toys so influenced my life that today, as an adult, I don’t even own a gun. I don’t have a problem with guns at all. I’ve just never really needed one. Not yet. I have been thinking of getting one, though. Times have changed and the world that I knew as a child has become a much more dangerous one. I mean, have you seen a Barbie Doll lately? 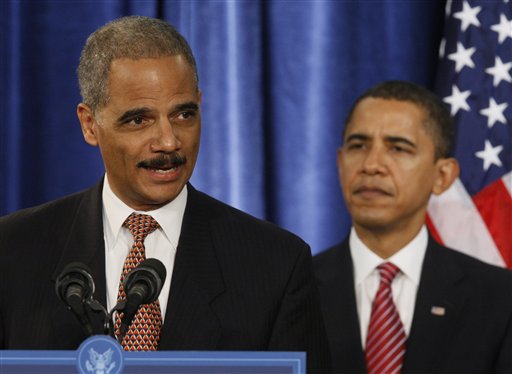 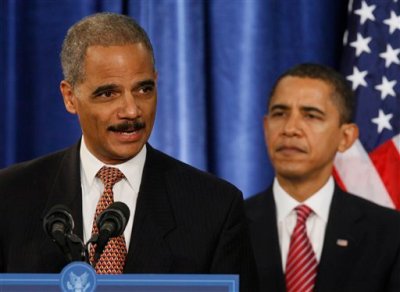 Attorney General Eric Holder, speaking at a House Judiciary Committee Meeting last week made himself look foolish…again. There’s nothing particularly unusual about that I suppose, but this time he really got my blood boiling. After stating that the Justice Department is considering a lawsuit to block Arizona’s new immigration law that has drawn so much controversy, Rep. Ted Poe (R-Texas) asked Mr. Holder, “Have you read the Arizona law?” Holder answered, “I have not had a chance. I grant that I have not read it.” Is this not the height of arrogance? For the Attorney General of the United States to threaten to file a lawsuit against a state for a law it passed without having read that law is unfathomable to me. What it says to me is that Mr. Holder thinks that he can say whatever he wants and that the American people will simply defer to him because of his position. This, of course, is in keeping with smug, self-righteous attitude exhibited by practically every member of this current administration and all it’s minions in congress. Especially from the man at the top who, while he can deliver a rousing speech, possesses an ego of epic proportions. Mr. Holder and the rest of the Obama administration never leave campaign mode and seem to be more interested in creating good sound bytes for the masses of reporters who blindly follow them as if they were some modern day pied piper.

In another exchange during the same meeting, this one with Rep. Lamar Smith (R-Texas), Mr. Holder refused to say that radical Islam might have been a contributing factor, if not the sole reason, for the Fort Hood shootings, the attempted Christmas day attack, and the attempted Times Square attack. Tea Party supporters are regularly ridiculed and mocked and spoken of in all manner of derogatory terms and yet Mr. Holder goes to ridiculous lengths to keep from uttering the words “radical Islam.” What is the issue here? The lunatics from the infamous Westboro Baptist Church in Kansas call themselves Christians. If they are, then it is certainly some form of radical Christianity which is not consistent with the teaching of scripture as I understand it. I’m perfectly comfortable saying that as well as calling them fanatical lunatics. Why? BECAUSE THAT’S WHAT THEY ARE! I’m not saying that every Muslim is a terrorist who wants to blow up innocent people here in America. I am saying that pretty much every terrorist appears to be a Muslim who practices some form of radical Islam which drives them to kill. That is not racist or discriminatory or intolerant in my view. It is a fact.

I wish that this administration would stop falling all over itself trying to be politically correct and just do something constructive for a change. Stop threatening Arizona and do something to protect the citizens there from the crimes committed by illegal immigrants who easily cross over the apparently porous border. I think that Arizona’s law-abiding citizens are safe to go have an ice cream at the ice cream shop without being shot with a taser or strip searched. Stop going off half-cocked about everything and practice a little common sense for once. You’re embarrassing us for goodness’ sake. Dang (now you’ve made me use a bad word)!

I probably have mentioned some of these before. Oh, well. I’m in that kind of mood. Shall we begin? Let’s!

There will be more I’m sure but I’m putting the soapbox away for now. Thanks for indulging me.

Something is rotten in the state of Denmark. At least in the Alabama House of Representatives anyway. Gambling and greed breed corruption. Whether anything comes of this or not, that is a fact. It will surely be interesting to watch all of this unfold.

This story is in the Wetumpka Herald and this one if from the Montgomery Advertiser.